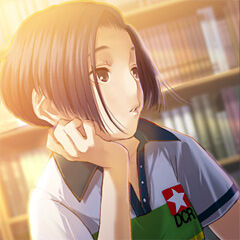 Rinko Kobayakawa (小早川 凛子) is a character in the Love Plus series.

As you are forced to become a member of the library committee, you meet up with Rinko, who is a freshman, but a senior committee member. Rinko constantly wears earphones and an attitude to keep people away.

Rinko's attitude stems from her feeling alienated and unwanted in her home after her father remarried, bringing a new mother and younger brother into the house. "Whenever I am home, the atmosphere darkens", as Rinko described. She wanders the streets after school, avoiding going back to an unwelcoming home. Rinko does not return home as she believes it's all her fault.

Community content is available under CC-BY-SA unless otherwise noted.
Advertisement